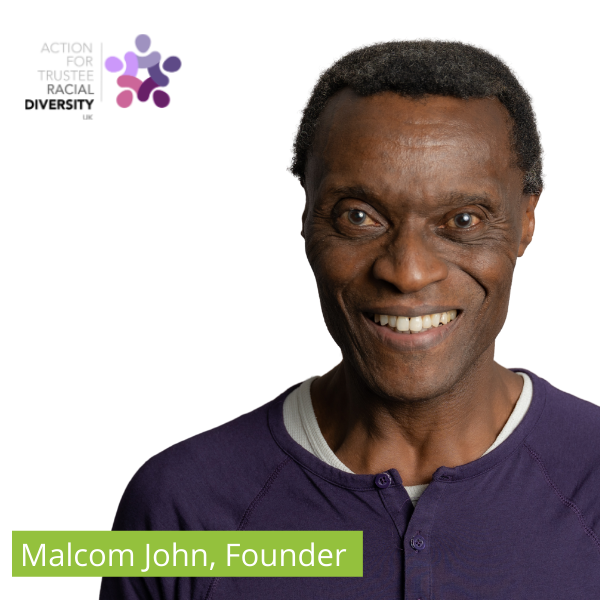 As part of Black History Month, we would like to shine the light on the incredible work of Malcolm John, addressing inequality in charity boardrooms and the lack of racial diversity at the governance level.

Malcolm founded Action for Trustee Racial Diversity (ATRD) to promote practical steps charities can take to address the significant and longstanding under-representation of people from Black and Asian backgrounds on charity Trustee Boards across the UK.

The campaign is supported by ACEVO, Association of Chairs, NCVO and Getting on Board and at Charity People we support and have collaborated with ATRD on our diversity search programme.

We asked Malcolm for his insight into the racial diversity journey in the charity sector:

Do you think there has been a shift in thinking around racism and racial diversity in the charity sector during 2020?

Yes, I think that there has been a shift of thinking within the predominantly white charity sector this year. A recognition that, overall, the sector needs to be much more racially diverse at board and senior management level than it is currently.

I don’t doubt that this has come to the fore because of the disproportionate impact of COVID on Black and Asian communities, the Black Lives Matter movement and the horrific murder of George Floyd in the US.  However, a shift in thinking – whilst welcome and long overdue –  will have no impact unless it is strongly underpinned by SMART actions starting from the top of organisations and strongly influenced and shaped by Black and Asian staff, trustees, volunteers and most of all service users.

What have you witnessed as barriers to undertaking trusteeships in charities for people of colour?

Through the Action for Trustee Racial Diversity campaign, I’ve been able to research and evidence the barriers to achieving racial diversity on trustee Boards from the perspectives of recruiters and aspiring Black and Asian trustees.  My own campaign volunteers from Black and Asian backgrounds have highlighted to me their own disappointing experiences of applying for trusteeships and their hope to understand more about how to overcome the hurdles they have faced by volunteering for the campaign.

The key barriers which we’ve identified are:

After acknowledging the issue, what sorts of first steps do you advise organisations take in addressing racial diversity on their boards?

Be honest about your previous failings to achieve a racially diverse trustee Board and publicly set out your commitment to address this and the actions you will take.

Don’t just decide to recruit only one Black or Asian trustee; too often, perhaps mistakenly, seen as tokenism

Ensure that your charity’s culture and environment is supportive and inclusive for new Black and Asian trustees so that they stay.

How does having a racially diverse board benefit charities?

For me, the key benefits to charities are that a racially diverse Board:

Can you give us an example of an organisation you’ve worked with that you would describe as a bright spot for overcoming a lack of racial diversity on their board?

I wouldn’t really want to pick out one specific organisation that I’ve worked with as part of this campaign.  I’ve been very encouraged by the range of organisations that have approached me for help and advice – large and small and from all parts of the UK.  The best ones for me are those which realise that recruiting Black or Asian trustees alone is not enough but that they must develop and sustain inclusive practices all throughout their charity.  Such charities also realise that the process of engaging, attracting and winning the confidence of potential trustees from Black and Asian communities and organisations needs to start well before they actually need to fill their trustee vacancies!

You can support their work by donating here.